Start Allgemein RENEW Cup 2016 – A resounding success for our DJK

Early morning of the 27. August, a small but dedicated DJK -Team started towards Roxel to participate now traditional RENEW-Cup. Even if the group was small, fielding only 9 field-players and one goalie, they were not afraid to take on the challenge of facing likes of 1. Bundesliga Wernigerode, Lilienthal and Schriesheim as well as the fellow 2. BuLi -teams of Dümptener Füchse, SSF Bonn and recently demoted Roxel.

The Trainer Daniel Joest had managed to guide his team through rigorous summer-training and even if some of the opponents could field three full blocks whereas DJK had only one, DJK was ready to meet the physical challenges facing them.

The very first opponent for DJK was TV Schriesheim. It was not too long ago when these two met in the FD-Cup. Schriesheim showed great discipline and skill and managed to edge up already 5-1 until DJK seemed to be able to get the engine going. The end result 7-4 for Schriesheim was fair, but DJK did show they were not to be taken lightly.

Some hours later, it was Wernigerode that was facing on the other side of the field. For years this team has consistently been at the top of the 1.Bundesliga. The match itself was not as one-sided affair as the end result, 6-2 for Wernigerode, might say. It was actually DJK that started off the scoring and was briefly leading the match. In the end the opponents, able to field 3 full blocks, showed their routine and strenght leaving DJK chasing the ball that was „just there a moment ago“. DJK however did not fold under the pressure and went down fighting and once again was able to show that we are able to fight up there with the best of them when we manage to get everything right at the same time.

The long day was not over however. The last game of the day was still played at 8.15 pm. For our team, the day had started more than 12 hours earlier, but the situation was the same for the opponent. BSV Roxel, as organizers of the tournament, had worked with a help of a great number of helpers, through the entire day (and of course the days, weeks and even months in advance to this day) to bring us this exciting and well-run tournament.

DJK as cut down further when Felix Gilsbach had to leave early, leaving DJK to play the last game with only 8 players on the field with Domenic Saurbier in the net. The team seemed to shrug off the challenge and go with real determination. The match proceeded to the 3rd period relatively even by numbers as DJK led by 3-2 going to the break. The last period was then a show of strength from DJK -side as they left Roxel quickly in the dust. The end-result of 7-2 for DJK was well deserved and fitting end to a hard day.

The second, and last day, of the tournament started for DJK with waiting. The very first match of the day between Dümptener Füchse and Kaufering was deciding who our opponents would be in the game for 5th place in the tournament. Kaufering was able to edge out DüFü and therefore passing them on the table and into the 3rd place match. This left DüFü to meet DJK for the 5th place.

The DJK had perhaps not the numbers DüFü was able to bring to the benches, but some reinforcements were able to join the diminished troops. As Kevin Strauss joined to defensive ranks and Bene Mix to the offense, the team went out with confidence to meet the opponents in a true local-derby spirits.
The game was hard-fought, but remained very clean and fair from both sides. DJK was able to slowly but surely edge ahead. By end of 2nd period was DJK already ahead 4-1.  When Jens and Ilari with his empty-netter scored in the last period, it was DJK that was able to come out with the well-deserved 6-1 win and 5th place in the tournament.

Overall the tournament can be considered a resounding success for our DJK. They showed enormous amounts of strength and dedication throughout the entire tournament. Even when the numbers against the 1.BuLi teams started to turn bad, the team never gave up and stuck with the plan. The trainer Daniel Joest, and the rest of the Verein, can be truly proud of the team and look forwards to an exciting Season. The goal can only be 1st BundesLiga and the tools are all there…it is only a matter of getting the machine to fire on all cylinders and DJK can be a threat against any team in Germany.

From statistical point of view, it was Jens Grauer that got the top honors on the scoring-sheets with his 6th!! place. Having scored 4 goals and 4 assists in 4 games he was placed best from all DJK. Not too far behind were Mark Jones with his 6 goals and 1 assist and Nils Hofferbert with his 5 goals and 2 assists. Incidentally these three were also the best 2.BuLi players in the whole tournament placing all in the top11.

Before returning to watch the finals in the hall, DJK paid a visit to our sponsors of many years, Jamasi. They had opened a brand new store in Münster we were able to visit. The team was able to test the newest equipment and show their appreciation to the sponsors.

Who won the tournament? Lilienthal was able to take down the champions of last year,Wernigerode,  in the Finals by 7-3.

Before the entire tournament was closed, was only one more thing to do, the drawing of the games for the Stena Line Pokal. DJK managed to get a bye in the first round, and for the second round game DJK will be facing TSV Tollwut Ebersgöns. 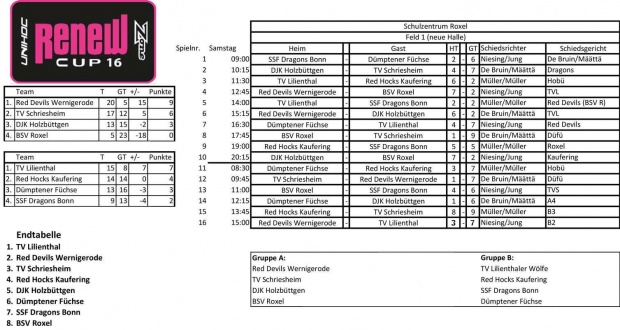