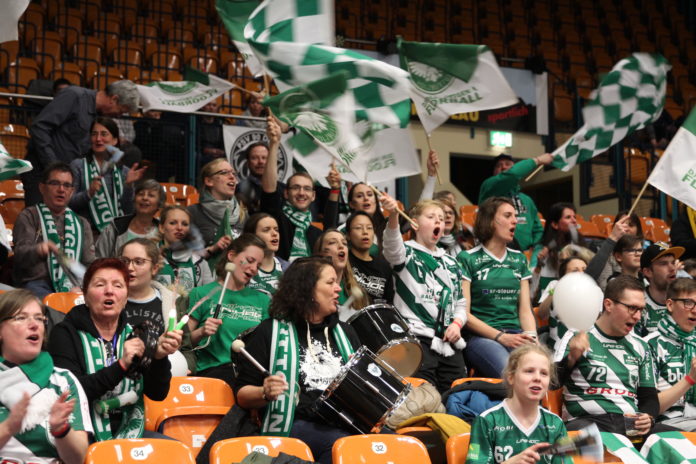 Last weekend it was time for the DJK Holzbüttgen Floorball -team to shine. After a roller-coaster of a season, we had qualified to be one of the best 4 teams in Germany and thus invited to the Final4 Tournament in Dessau. For those who do not know, Dessau is about 500km away from our homes, so not only to get our team there, but to inspire close to 100 of our own fans to come along, is nothing short of a miracle.

Actually no! This is not a miracle. This is a testament to the enormous amount of time and effort put in by a number of people. The team got us there with their incredible performance throughout the first rounds of the competition, but also the fans who were always there to show their incredible support, the legions of volunteers that come there game after game to ensure the players, the guest-team, the referees, the fans….everyone gets a first-class experience coming to us.

So on Friday 10.3.2016, off we were in buses (yes more than one!!) heading east, knowing fully well that we had out work cut out for us. We were coming there as the clear underdogs when the other three teams were all from the top of the 1st Bundesliga and we lowly 4th place in the 2nd BundesLiga West. After gruelling 8h bustrip, the team finally arrived to Dessau and got their first chance to see the hall with a capacity of 3,700
people. If it was not clear by then, it was now, that this would be the biggest game they had ever played with DJK.

As our game was only scheduled for 20.00 on Saturday, this left us with a chance to relax a little and have nice calm preparation for the game. The team had a nice lunch together before heading towards the hall to watch the first Semi-Final between UHC Weißenfels and
TV Lilienthal. The game was fast-paced and gave a nice feel what our game might turn into. Team remained still very focused and calm prior to the game even if some nervousness was to be expected. As the first Semi-Final entered the third period some 2.5h before our game, our team headed out of the hall to catch some fresh air before starting the preparation for our game. The excitement within the team was nearly tangible. Not a sign of fear or anxiety but anticipation to „go out there and show them what we can“. The plan was to keep our own end clean and focus on the things where we knew we could hurt our opponent BAT Berlin. The lineups werediscussed, the plan was re-instated and before too long….the team  was ready!
When the clock finally reached 19.53….the Announcer had finished reading the lineups and done his usual announcements, it was showtime. DJK walked to the field to face the crowd. It was like walking to a slightly larger homegame as the fans had brought their flags, scarves, t-shirts, trikots, drums, cowbells and huge banners. If this did not sent shivers down your spine, nothing did. What made it even more special, was the fact that the enthusiasm of the DJK Fans had infected a number of other teams supporters to „our“ side. The DJK-Classics like „Der DJK….ist mein Verein und mein Herz schlägt für Holzbüttgen allein“ were sung by DJK-Fans and others alike. So it was not only the team that was ready, but the fans as well! Showtime!!

I will not cover the game in details much as you can see it yourself on the web. The copy of the live-stream is available there at http://playo.tv.
The DJK adventure got to a near perfect start though as just a minute was played, Jens Grauer was able to put us in front! A fairy-tale ending it was not to be. BAT Berlin was able to punish us from our penalties with 100% success-rate. Regardless of whether the first goal was a result of a high-stick (after all the video show the ball was only shoulder-high :)), it was a great game. Benedikt Mix and Morten Winter were still able to put us in contention with their 6-2 and 6-3 goals before Berlin closed the game at 8-3.

Throughout the evening DJK showed that we are able to compete at the highest level on the same-level. Whether DJK will eventually be going up to the 1st Bundesliga is after this game not a question of „if“ but „when“. In the game, we were able to keep our heads high
and we went down fighting. There was never a question of giving up or being embarrassed there on the floor.

Yes…there was some disappointment after the game…but only because these guys are proud of what they do and they hate losing. However, overall you can consider this game a success for the team and for the club and fans behind it. This sentiment seemed to be
shared by many of those „outsiders“ as well. Positive comments about DJK came from the other players from TV Lilienthal, UHCWeißenfels and others. „That Finn of yours…MAN he is fast!!“ was a commentary heard not only once.

After a short night…well the team had to celebrate a little…a number of the players were up the next morning early to accompany our U11 and U13 teams to the small tournament organized by PSV Dessau. With the parents there and a number of the players from the 1st
Team as coaches, our juniors were ready to take on the world! Our U11 Team managed a 5th place finish and the U13 ended up even on the medals by placing 3rd in tough competition.

Final touch to the busy weekend for our DJK-Group was to watch the final between UHC Weißenfels and BAT Berlin. As UHC seemed to put it all away already in the first period, BAT Berlin was able to claw back in to the game and forced it in the end to overtime. In the
end it was not to be for BAT Berlin as an unfortunate own goal from BAT Berlin crashed their hopes for a title.

Overall, this weekend, even if we came home empty handed…no trophies, this can be considered as an enormous success for DJK and the people of DJK. Rarely have I seen such connection between the team and it’s fans, the juniors, the parents. This Pokal-Competition
has to be counted as a succesful end to long campaign. One could also consider this as a starting-point of the next campaign. The team has now tasted success, it has seen first-hand what it takes tobe on the top in this competition and has started to realize „maybe  we DO have it…maybe we DO belong up there!“. I would even go as far as dropping the maybe. We DO have it! We DO belong there! We are just not there….YET! But we will be!

So once again, thank you to all that have made it possible. The players, the FANS!!!, the parents, the juniors, the countless of people working behind the scenes from Trainer Daniel Joest and Team Manager Kristof Marczinkowski to everyone else all the way to the Mascot and the ball-boys and girls!

Last but not least, we are a Club that is in an extremely lucky position to have incredible Sponsors. Many of them have been with us for years and have played a significant role in getting us this far. Running a club with so many teams from U9 all the way to the Bundesliga does not come cheap, and as much as the members already cover, as many cakes and Waffels we sell, it is not quite enough to cover everything. This is where our unbelievable Sponsors step in and helped with taking some of the financial burden away. Thank you so much for your support and hope to keep you as part of our family as our story is only starting!

You all, players, fans, volunteers, parents, enthusiasts, sponsors make me feel proud to be part of this team and look forwards to working with you in the future.